AfroRave singer, Rema has put the internet in a frenzy. The Bad Commando took to Twitter to announce that he was finally admitted into the University of Lagos to study Creative Art. He opened up about not wanting to go, but his mother advised him to get a degree…

Rema also added that he will be dropping his new album “Rave and Roses” before he starts the semester. 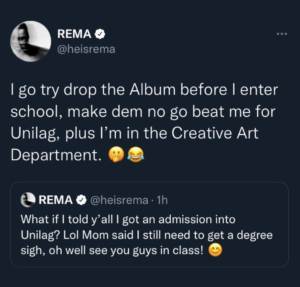 Many (guys) left comments that they will advise their girls in Rema’s department to either drop out or switch departments. Others asked if he wrote jamb and why didn’t he travel out to further his education.

The ladies, well they are excited that Rema is coming to Unilag. Some dropped comments about carrying over a course and having extra years just to spend time with Rema.