Davido Hypes Himself After Many Nigerians Failed To Appreciate His Collaborations

Nigerian artistes, Davido is adhering to the phrase which says,” if they don’t hype you, you hype yourself”

The Jowo crooner hopped on IG this morning to hype his collaborations after Nigerians failed to appreciate him and his songs.

A Twitter user identified as Daniel Orubo took to the Blue bird app, Twitter to reveal that Nigerians don’t appreciate Davido and his features with other artists enough.

According to him, Davido is good and he sounds great with all the artists he has ever collaborated with.

Davido who totally agreed with the user reposted the tweet on his IG story, clearly sending a message to Nigerians and music lovers world wide to appreciate him better. 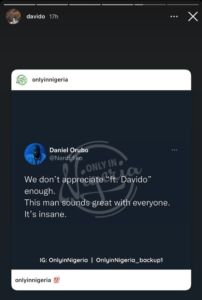