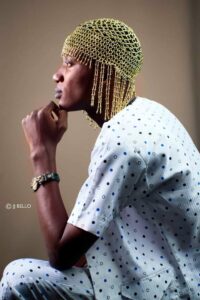 1.Tell us about yourself

My name is Bayo Adeeyo, but my fans call me Bayo Ododo. I’m an upcoming folk music artiste.

2. When did you start singing in folklore?
I started folklore music in 2018 with my first single track titled ‘Iwalewa’ which gives me ground in in music industry.

3. What motivates you?
Well, let say it’s my passion for folk music at the very early age of my life, coupled with Yoruba tales from my grandma that deepens my love in Yoruba culture. Also, listening to folk music and watching African movie while growing up fuel my passion to rescue our decaying Yoruba cultural heritage through my own little way of educating the young ones and adults about our culture with my music. So, those are what I would attribute to the motivation behind my career in folk music.

4. Why did you pick this particular genre of music ( folklore)?
As I said earlier, to educate public about our culture and to preserve it for the next generation. Our ways of life has been replaced by the culture of Western world. Hardly can we see young ones, and, even adults these days doing things in a way that conform to our culture. This cultural decadence is not even far fetch, take a look at how our generation dresses these days– most of these sartorial styles are from our colonial master. As a matter of fact, hip pop is the dominant musical genre in the music industry of which most of the information being passed in that music stand no moral ground of our culture! I can continue mentioning these maladies, but talk is cheap, as some people would say. Now, the challenge here now is ‘who is going to rise up against these cultural decadence?’ Who is going save African culture from this gradual extinction? By what ways are we going to inculcate the values of our heritage on this generation and the one to come? This generation and the one to come need to know the valued of Yoruba culture, ethic of Love and beauty of peaceful coexistence as well our moral standard. It’s thus this challenge I want to tackle with my music.

5. Who can you say is your role model, whose music made you pick folklore?
I listen to Beautiful Nubia, Adekunle Gold, Jimi solanke lijadu sister’s, Orlando Julius etc. They really affect my music alot, Great Artists.

6. Considering the fact that we have a lot of great musicians and upcoming ones that are already making waves in music, do you think folklore has a chance of being recognised as a popular genre of music in the present generation?
Yeah. That is true. As far as Nigeria music industry is concerned at present, folk music seems not promising, in the sense that few people listen to it, but I will not be deterred. Passion have got to do its work! With my music, I believe positive change isn’t not an utopian goal.

7. Has there ever been a time you were discouraged? How did you encourage yourself?
There are lots of discouragement. I can remember the day we went for a stage performance in Lagos. After a lot of sleepless nights of rehearsal with bands and other other financial sacrifices we were not allowed to perform that day. Myself and the bands were not happy that day. Also, there was a time I went for an interview on a TV show. I was asked of my official music video so that it could be played during the interview. But unfortunately, I don’t have any official music video yet. Though I have a stage performance video to give but I considered it not presentable enough and I have to give them reluctantly. Furtunately, the music did not play on their screen. So the major thing that discouraged me that day is that another artiste video was to be used to cover up the break time on the show instead of my music video. Those are one of the the big blows that nearly knocked me down in this music career path. But like I put it earlier, passion have got to do its work! The passion has been keeping me going.

8. Is there a particular message you want to pass across with folklore music?
To let our people embrace the fact that our ways of life is not inferior. And to expose our culture to the world because that’s our origin and identity. We have got to preserve it by reminding one another about Africa cultural heritage, moral standard of doing things and relating with others, knowing and embracing the ethic of love and beauty of peaceful coexistence.