The African Giant star secured the spot ahead of his Nigerian counterpart Wizkid, and American rapper, Da Baby. 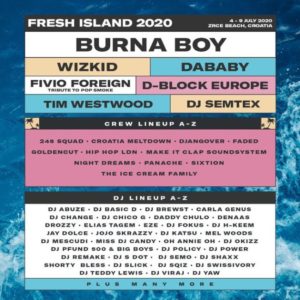 This is the first time Burna Boy will be headlining an international festival after his controversial comment about 2019 Coachella.

Fresh Island Music Festival is slated to take place between 4-9 July 2020 at ZRCE beach in Croatia.

Fresh Island Festival was launched in 2012 and immediately reached an important spot in Europeans’ hearts, being a must-see even in the summer. Famed for its sun-drenched vibes and poolside dancing, the festival has formed into a full week hip hop/RnB & afrobeat holiday with pre and after-parties, pool parties and boat parties.

Big artistes such as Wiz Khalifa, Young Thug, Chris Brown, Migos, ASAP Rocky, Rae Sremmurd, Snoop Dogg, Stormzy, Giggs and many others have all thrilled fans in the past at the festival.