A moral culture policy in Iran as went against an Instagram star who had radical plastic surgery to look like actress Angelina Jolie has been arrested in Iran on blasphemy charges.

Sahar Tabar was detained on the orders of Tehran’s guidance court, which deals with “cultural crimes and social and moral corruption”, the country’s state news agency said on Saturday (local time).

Tabar rose to prominence on Instagram in 2018 after posting a series of images of her face altered through plastic surgery. Yahoo news reports.

Most of the photos and videos shared with her 26,800 followers have also been heavily edited, and some have described her to look like a ‘zombie’ version of Angelina Jolie and drawn comparisons to the titular character from the movie, Corpse Bride.

The account features images of her with a gaunt face, pouting lips and sharply turned-up nose.

In some images she can be seen wearing a white bandage on her nose.

The bandages, usually required after nose operations, are commonly seen on Tehran’s streets.

Cosmetic surgery is hugely popular in the Islamic republic, with tens of thousands of operations taking place each year.

Revealing the secret to her look last year, Sahar Tabar said most of it was down to her makeup and photoshop skills.

“Every time I publish a photo, I paint my face in an increasingly funny way,” she said.

The Instagram user described her account as her creative outlet and said she inspired her fans with her posts.

“It is a way of expressing yourself, a kind of art. My fans know that this is not my real face… I am a muse myself,” she said.

Tabar said she didn’t aim to look like the famous actress or a movie character.

“I did not even think about being like Jolie. Also, I did not want to resemble the cartoon character the Corpse Bride,” Tabar said, adding she only recently understood the comparisons. 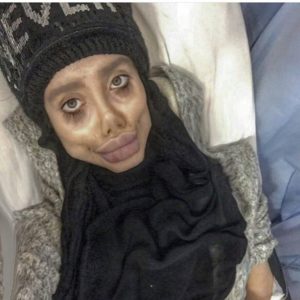